Based on the tales of Peter Rabbit conceptualized and created by Beatrix Potter, this live action computer animated comedy has been co-scripted, co-produced & directed by Will Gluck. Made at a budget of about $50 million reportedly, the film has till now emerged as the 10th highest grossing film since the start of this calendar year 2018 and is believed to have generated a revenue of nearly $230 million globally!

James Corden has lent his voice for the character of Peter Rabbit while Daisy Ridley has lent her voice for the Cottontail Rabbit! Sam Neill has served as the voice cast for Tommy Brock!

Peter and his team of rabbits spend most of their time picking on vegetables from a garden owned by Joe in the neighborhood and are supported by Bea who paints their pictures against the backdrop of the surrounding natural settings.

Joe dies suddenly and with the arrival of Thomas, a nephew, things are no smoother for Peter and his teammates!

Thomas and Bea develop a soft corner for each other but problems crop up in abundant measure!

Finally, Thomas and Bea move to London, of course, accompanied by Peter and his team! While Thomas has opened a toy shop of his own, Bea spends time penning illustrative books on Peter and his gang! 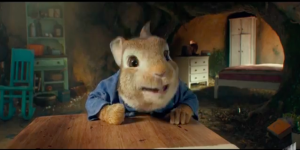